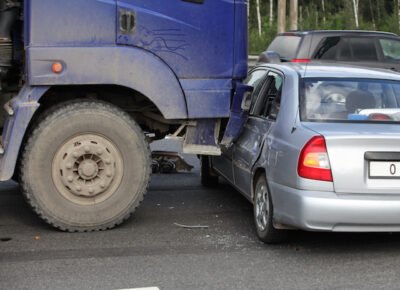 The human body is capable of amazing things. We can heal ourselves and survive life-threatening, impossible to believe situations. Trucking accidents in particular tend to be rather gruesome, and it is always inspiring to hear survivor’s stories.

The Man Who Died and Then Won the Lottery

Australian truck driver Bill Morgan was having a normal day on the job until he was in a horrific accident. Crushed inside the truck, the trauma of the accident caused him to suffer a fatal heart attack. He was clinically dead for 14 minutes before paramedics revived him. He then fell into a coma for 12 days, and physicians recommended taking him off life support.

Luckily, the family did not take the doctor’s advice. Morgan made a full recovery. Once he recovered, Morgan bought a scratch ticket – and won a $17,000 car. The local news station decided to do a piece on him, reenacting him scratching the winning ticket. Shockingly, he also won on his reenactment ticket – for a whopping $170,000! Talk about an eventful year.

The Girl Who Got Rear-Ended and Thrown Off a Bridge

In 2013, college student Morgan Lake was on her way home to visit family and friends. Sitting in idle traffic, Lake glanced in her rearview mirror only to see the most frightening sight of her life: an 18-wheeler barreling toward her car at top speed. The big-rig slammed into her, shattering the windows and sending the car over the guardrail of the Chesapeake Bay Bridge with Lake inside.

Astonishingly, she managed to escape her car as it began to sink. She emerged 30 seconds later and made her way to the rocks supporting the bridge’s pillars. Police rescued her, and she recovered without a single scratch. Officials charged the teamster with negligent driving and other infractions.

The Man In the Middle of a Trucking Accident Sandwich

Kaleb Whitby was taking his time driving down an icy Oregon highway last year when he suddenly saw a wayward tractor-trailer speeding towards him. With only seconds to act, he closed his eyes and gripped his steering wheel, bracing for the impact. The big-rig smashed into his pickup truck, shattering the glass and demolishing the car. Seconds later, a second semi-trailer hit Whitby from behind, wedging him between the two trucks.

The space between the two trucks was just big enough to keep Whitby alive. Whitby’s situation was just one in what ended up as a 26-car pileup that day. Surprisingly, there were no fatalities, and Whitby only suffered a bruise on his eyebrow and some scratches on his hand.

Did you or a loved one survive a serious tucking accident? Contact the Law Offices of Edward C. Casey, Jr. for help with your personal injury case.