3 People Who Survived Being Hit by a Truck: Lessons We Can Learn 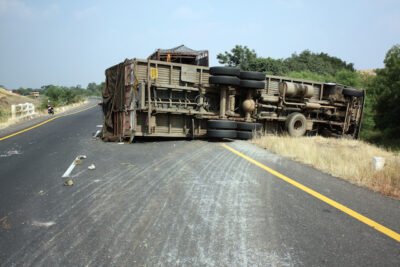 Getting hit by a truck – even a glancing accident – can lead to debilitating injuries because of the tremendous forces involved. The force exerted on an accident victim is proportional to both the acceleration and masses involved. Thus, a 20 ton big rig that hits a highway underpass and goes from 60 MPH to 0 MPH will generate as much force in that crash as a would a 2 ton passenger car crashing into that same underpass going 600 MPH. Amazingly and fortunately, though, many people survive encounters with trucks. Here are three of their stories and what we can learn from them.

On Sept. 19, 2015, in Moscow, Russia, a speeding car collided with a truck, pushing the larger vehicle into an intersection, where it hit a bike. The bike rider survived with just a few scrapes and bruises. A video of the incident shows the bike get up after the accident to check on the truck driver. The lesson here is that accident physics can be unpredictable: what might look like a fatal accident could by a near miss.

According to local news reports, a 14-year-old boy in Penkridge, Staffordshire in the U.K. had been playing “chicken” with friends in October 2015, when a 40-ton truck hit him. He miraculously survived with minor injuries. The trucker’s camera captured the incident as it occurred. When pedestrians (and drivers) contribute to a truck accident, the court may determine that the trucker was not at fault (or not completely at fault) and reduce liability accordingly.

A 27-year-old man in Oregon nearly died in January 2015 after his pick-up truck was crushed between two big rigs. He did suffer minor injuries when his vehicle’s steering wheel got pushed against his leg. Per news reports, due to deteriorating foggy and icy weather conditions, a truck jackknifed across the freeway. Too late, the man attempted to veer out of the way. After he hit the semi, another out-of-control big rig collided with the first, trapping him in between the vehicles. His treatment consisted of two Band-Aids on one finger and some ice for his left eye.

Bad weather conditions can reduce visibility and increase truck stopping time. Proceed with great care on the freeway in such situations, and avoid following trucks too closely.

If you or someone you love got injured in a crash, how will you pay the medical bills and obtain appropriate compensation for long-term costs, such as therapy and loss of productivity at work? Our experienced truck accident lawyers can advocate forcefully for fair treatment and ensure that the insurance company treats you with dignity and respect. Call us for a free and confidential consultation about your next steps