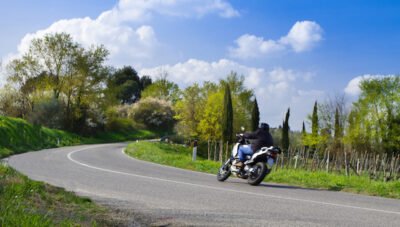 We all know that motorcycles can be dangerous. Every year, thousands of Americans get into motorcycle accidents, some of which are deadly. Sometimes, however, people defy death and survive even the most horrific accidents. Here are some of their stories.

Man Gets Struck by Lightning and Crashes His Motorcycle

In August of 2015, Eugene Villenes headed to work on his motorcycle. Above him, a dark cloud was floating across an otherwise peaceful sky. Suddenly, the cloud opened up and released a flash of lighting, striking Villenes. He was driving in the fast lane when the bolt struck him, and he went limp. Villenes careened across two lanes before finally crashing and demolishing his bike. Despite crashing in the midst of rush-hour traffic, no other vehicles hit Villenes, and he miraculously recovered – albeit with a few bruised ribs and a partially punctured lung.

Famous actor Gary Busey was in a near-fatal accident in 1988. Prior to his accident, he often voiced his opinion against wearing helmets, but the accident changed his life. Busey was traveling at 40 mph when he crashed, sending him flying over the handlebars and hitting his head on the pavement. He lost a sizeable portion of his skull, and he was in a coma for a month. He pulled through, and he is now a strong advocate for wearing a helmet while biking.

Man Captures His Own Motorcycle Accident on a GoPro

Sergey Kotov was riding his motorcycle down a Colorado highway in 2014 on what would otherwise be a normal April day. Kotov was filming his ride with his new GoPro when a car pulled in front of him. By the time Kotov realized what was happening, it was too late. He smashed into the car, totaling his bike and sending him flying through the air. Kotov went into a coma but made a full recovery a year later.

Man Passes Out on Motorcycle and Sustains Incredible Injuries

Gary Natvig headed to his niece’s high school graduation in 2005. While traveling down highway 73 in Wisconsin, Natvig suddenly passed out on his motorcycle. He veered off the highway and crashed at a high speed. He totaled his bike, and a Flight for Life helicopter rushed him to the nearest hospital. He suffered a broken back, ruptured spleen, collapsed lungs, a torn liver, nine broken ribs, and three brain injuries. Things did not look good, and physicians put Natvig into an induced coma. Surprisingly, the hospital released him two months later. He was back to work within five months.

NFL Quarterback Collides With a Windshield

Steelers quarterback Ben Roethlisberger was driving his motorcycle without a helmet (and without a valid license) outside downtown Pittsburgh in the summer of 2006. Roethlisberger was traveling through an intersection when he slammed into a car taking a left. The impact threw him into the windshield, and he suffered a broken nose, broken jaw, and a 9-inch laceration on the back of his head. Despite critical injuries, Roethlisberger made a full recovery – just in time for his third pre-season with the Steelers.

Have you been in a motorcycle accident? Contact the Law Offices of Edward C. Casey, Jr. to explore your options for a personal injury claim.